Wealth in Waste: India’s Potential to Bring Textile Waste Back Into The Supply Chain

THE VIBRANT TEXTILE INDUSTRY IN INDIA

India leads in both the production and consumption of textile and apparel. Availability of raw materials and skilled workforce makes it a significant contributor to both the domestic and global textile supply chain. Given this, India has a vast quantity of textile waste.

The country is one of the largest producers of cotton, jute and silk and accounts for 25% of the global cotton production.13 With respect to production capacities, the Indian textile and apparel industry is able to conduct all activities ranging from spinning to apparel production. India also has the second-largest spinning capacity with 50 million spindles.14 Furthermore, the skilled workforce in the country has the capacity to work with diverse materials, both knit and woven fabrics apparel categories15 making India an important sourcing destination for global brands.16

Besides being a production hub, India is also a growing consumer of textile and apparel products with domestic consumption valued at USD 75 billion.17 This consumption is expected to increase as the economic growth brings 118 million additional households into the upper and upper-middle class between 2015 to 202518 in India. This consumption growth is also visible in the total expenditure of Indians on clothes, which increased from USD 24.65 billion (INR 1,924 billion) in 2010 to USD 69.3 billion (INR 5,408 billion) in 2018.19 An increase in disposable incomes and changes in consumption pattern among Indians has led to a boom in the retail sector in the country.

India’s decades-old culture and history of reusing, remaking and redesigning garments has enabled informal trade routes for textile waste and infrastructure to process it.

Indigenous communities in different parts of the country, especially in Jammu and Kashmir, Gujarat, and Rajasthan have been involved in traditional and cultural practices to preserve and reuse old textile for decades.21 With the emergence of recycling processes and synthetic fibres, these conventional and cultural practices were replaced by machine-based recycling. Since the 1980s, Panipat, a town in the Haryana state, flourished to become the largest textile recycling hub in India.22 Consequently, newer and more efficient recycling hubs like Tirupur have also emerged with significant potential. These hubs work with different types of wastes from various sources to meet domestic and international demand for recycled products, while continuously finding various reuse and downcycling use cases.23

While India possesses a huge mechanical recycling infrastructure and potential, the country has not been able to establish complete circularity of textile wastes.24 This is largely due to the lack of visibility and understanding of the underlying potential of this industry. To date, the value chain managing it remains largely unorganised, leading to leakage of waste at multiple levels. The industry functions with minimal support for technological advancement and process standardisation.25 Consequently, the yarn produced is lower in quality and is deemed unfit for global apparel manufacturing. This, coupled with the stiff competition from inexpensive synthetic fibres, is limiting the economic growth and viability of the recycling industry in India. 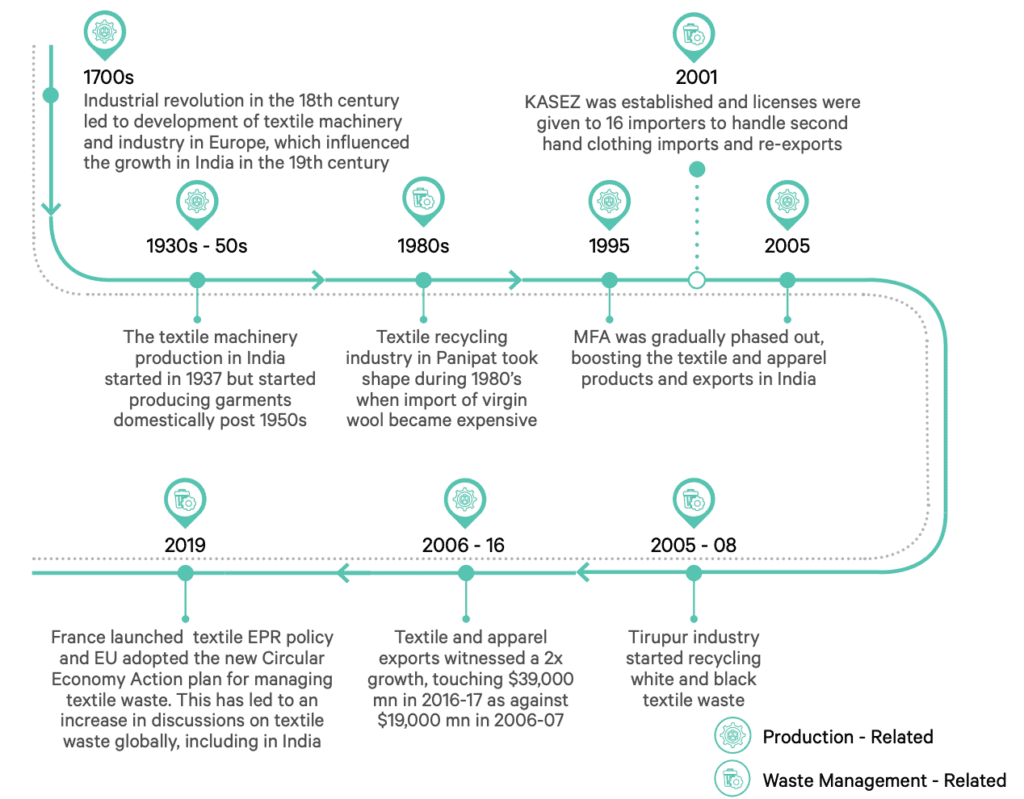 In recent years, the fashion industry has garnered attention due to sustainability concerns in the sector. With the ‘take-make-dispose’ model of the industry resulting in increased waste generation and the production and processing of (virgin) materials contributing to global GHG emission and high water consumption, the industry is taking active steps to close the loop and introduce as much of waste as possible back into the production process.32

‘Circularity in textile’ refers to systematically devising a regenerative system where textile is circulated until its maximum value is retained for as long as possible by reusing or recycling, while simultaneously minimising the production of waste at every stage to ensure social, economic, ecological, and environmental benefits as well as the well-being of those employed in the industry.39

The global movement towards circularity in textile waste can provide the Indian recycling industry with a unique opportunity to leverage and grow its existing capabilities to make it one of the largest circular textile regions.

India is one of the largest mechanical recycling hubs in the world, with over 900 recycling units40 and ~4 million informal workers processing textile waste.41 The country has expertise in sorting, using the right combination of colour and fibres to reach the desired quality, and identifying an economic value for non-recyclable waste. Further strengthening this infrastructure requires increased focus from brands, government, philanthropic investments, technological advancements and value chain formalisation to strengthen the recycling industry in India at a low economic cost.