Wealth in Waste: India’s Potential to Bring Textile Waste Back Into The Supply Chain

Provides estimates for textile waste in India, its end use and material composition. Also highlights the flow of waste within and outside India

TYPES AND QUANTITY OF TEXTILE WASTE 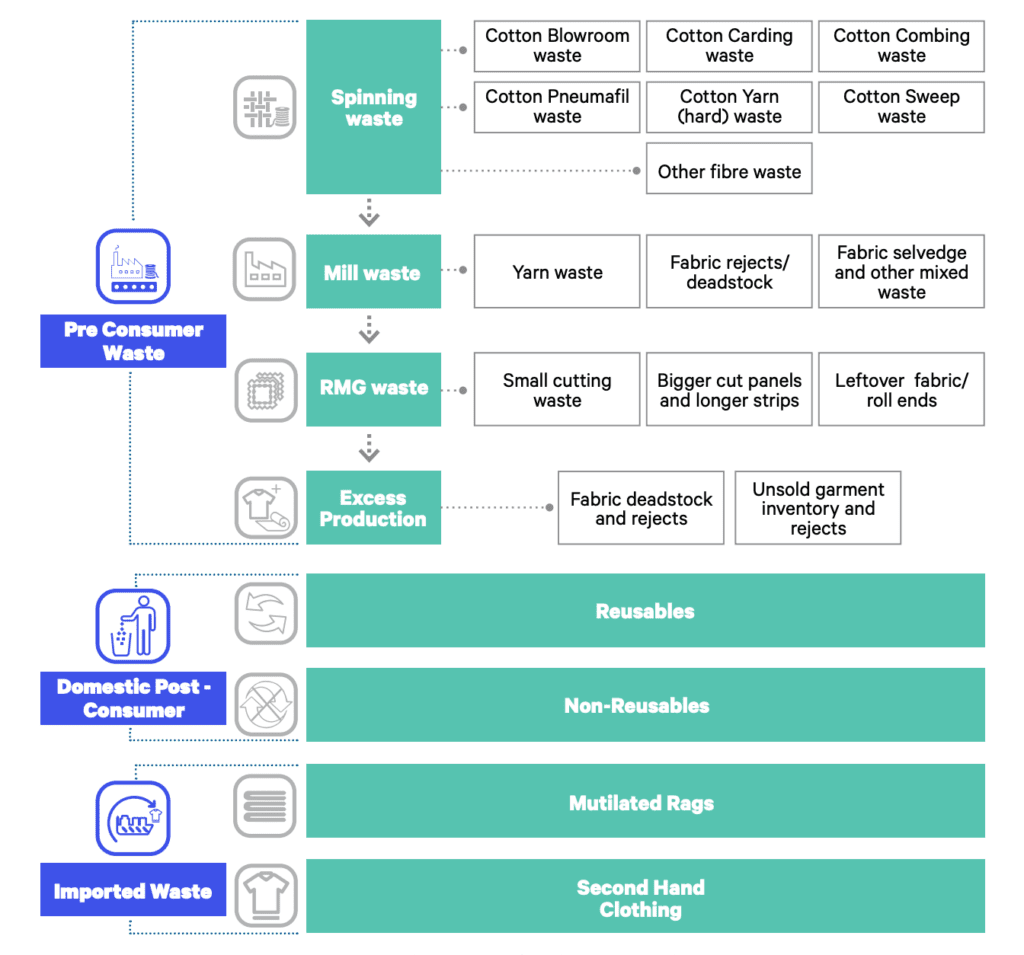 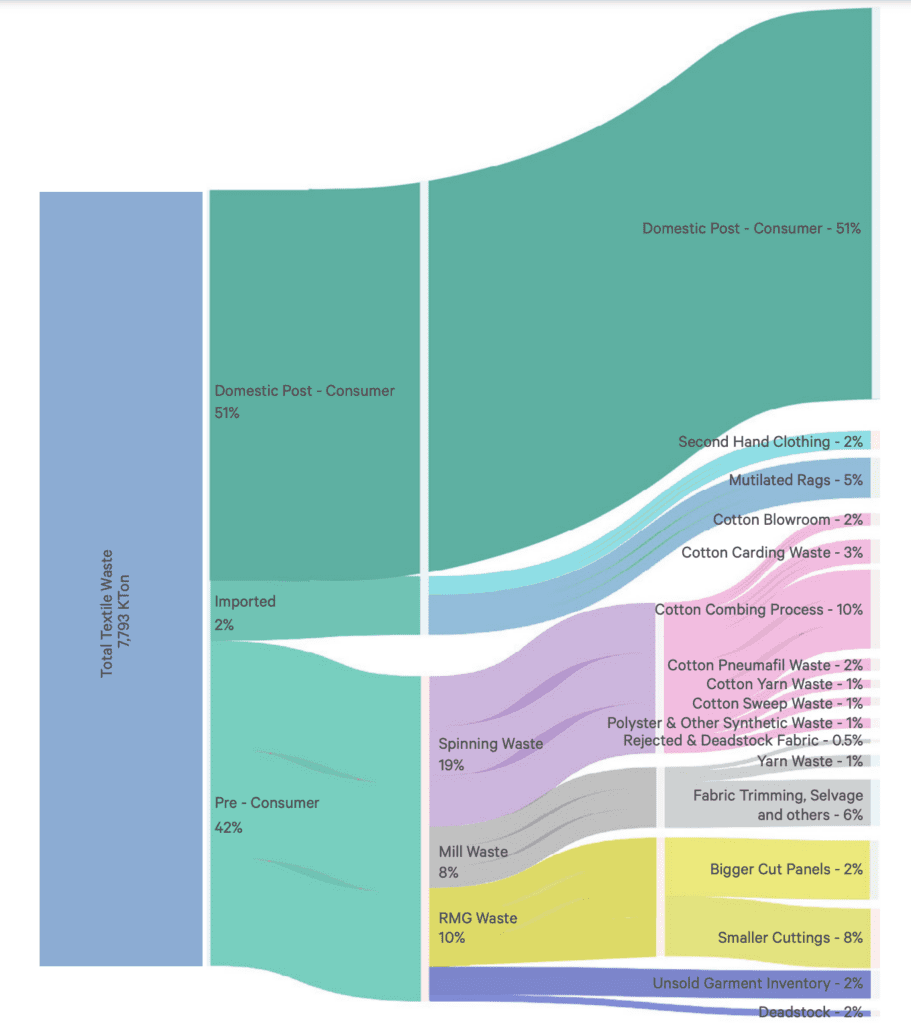 Illustration 10: Total quantity of textile waste in India and quantities by waste streams and types

1. The values represented above are measured in KiloTon (KTon)

3. All The figures have been rounded off to the nearest whole number 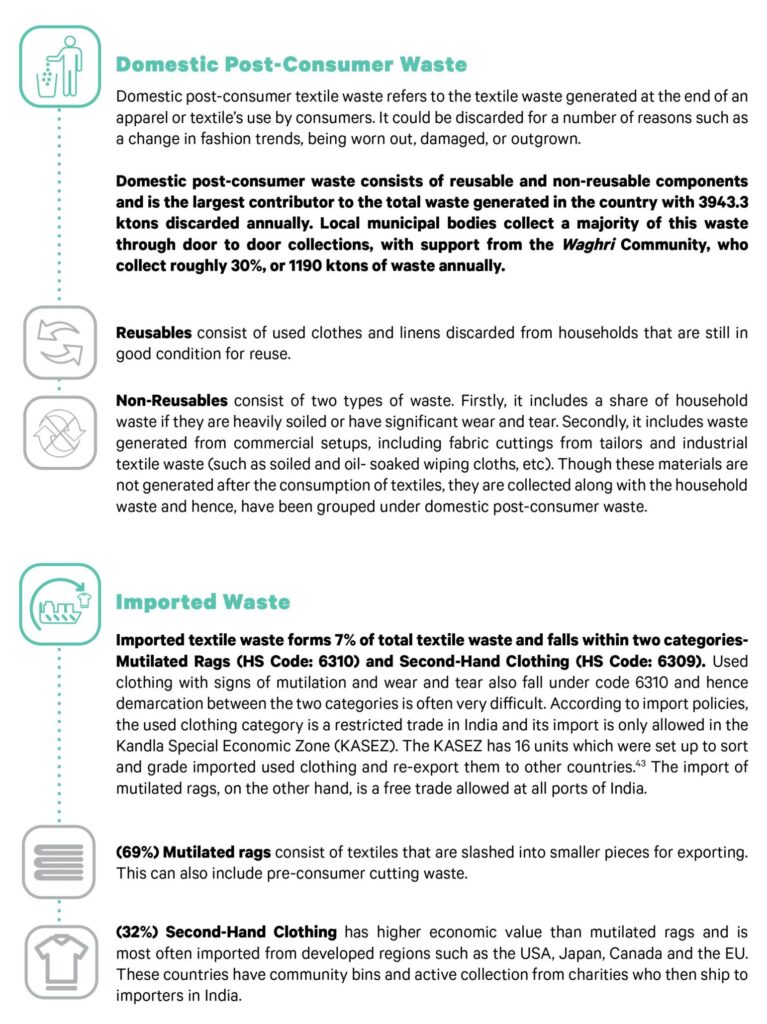 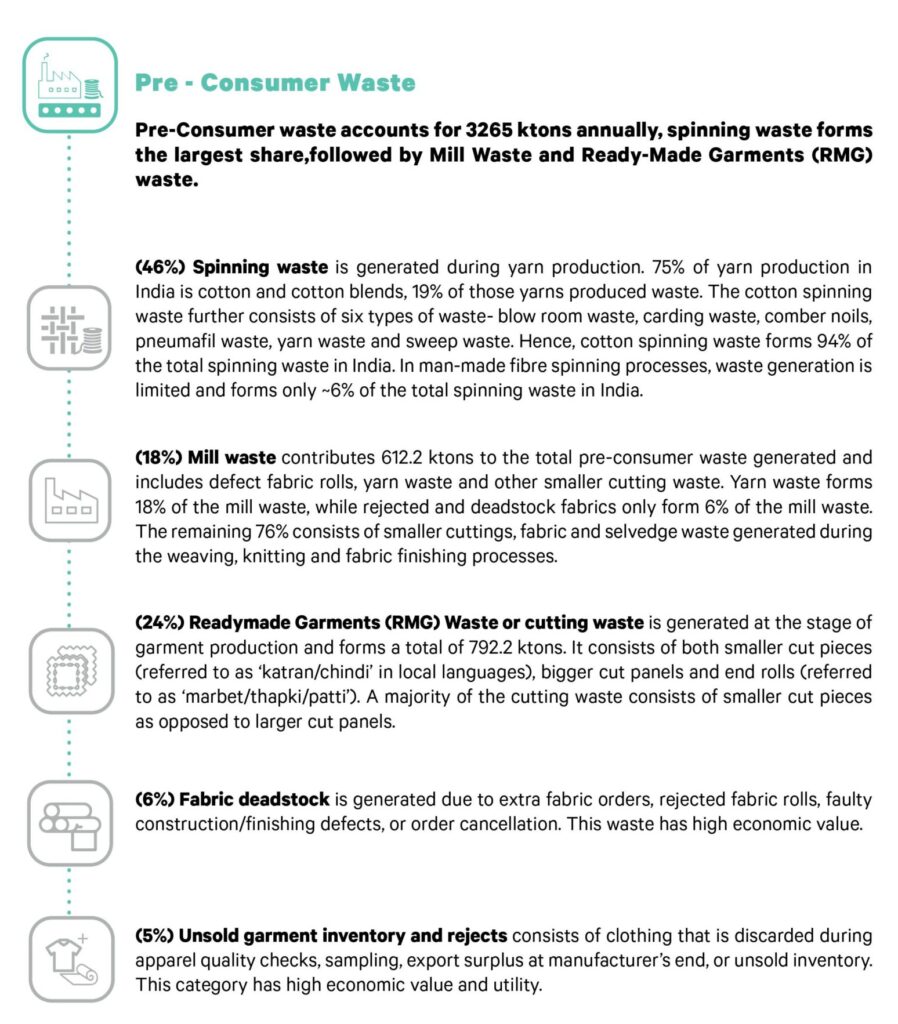 There are four options for the treatment of textile waste: Recycle, Reuse, Downcycle, and Landfill/Incineration. Recycling and Reuse account for 59% and the remaining 41% is downcycled for use in other industries or incinerated/landfilled.

Of the textile recycled, much of it moves through low grade recycling processes. Estimates suggest that 60-90% of recycled material is used for domestic markets but it is difficult to estimate the exact proportion of low-grade recycling due to multiple material compositions and market factors. 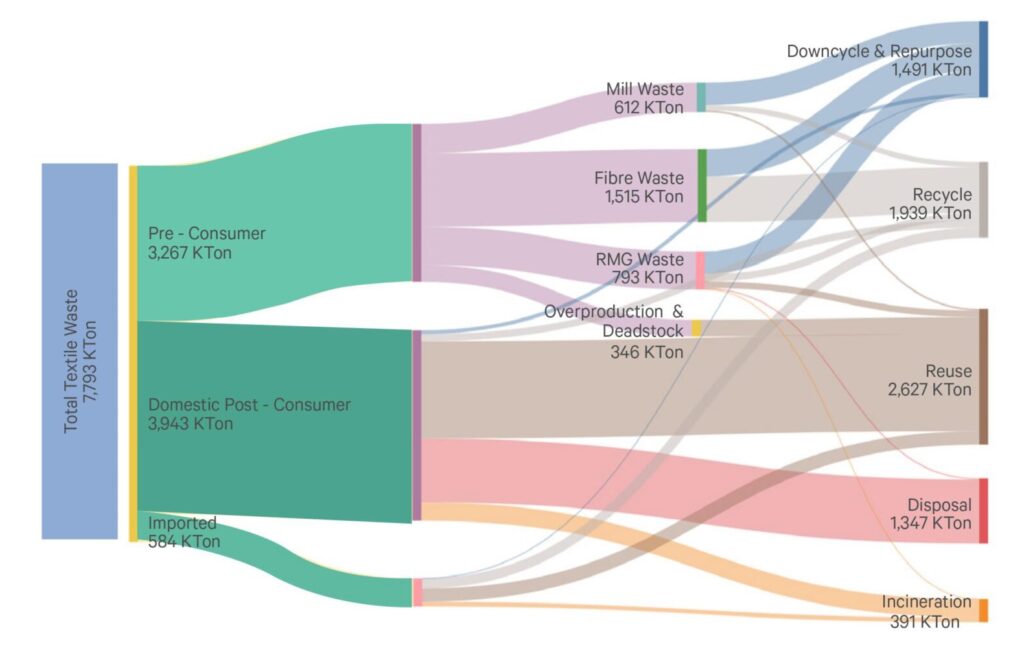 The treatment of waste across the three types; pre-consumer, post-consumer, and imported, varies greatly depending on the use case. Of the total pre-consumer waste, only mill waste and overproduction waste is being reused, while cutting waste appears to have multiple applications depending on its quality. More than 50% of the domestic post-consumer waste consisting of second-hand clothing is sold for reuse in the Indian domestic market. Recycling and downcycling use cases for this waste type are limited, and a large proportion (39%) is diverted to incineration for energy and landfill. Further, 64% of the imported textile waste is either being recycled into yarn or exported for reuse. While recycling of imported waste mostly takes place within India, second-hand clothing can be re-exported to Africa and Europe for reuse post sorting processes in India. 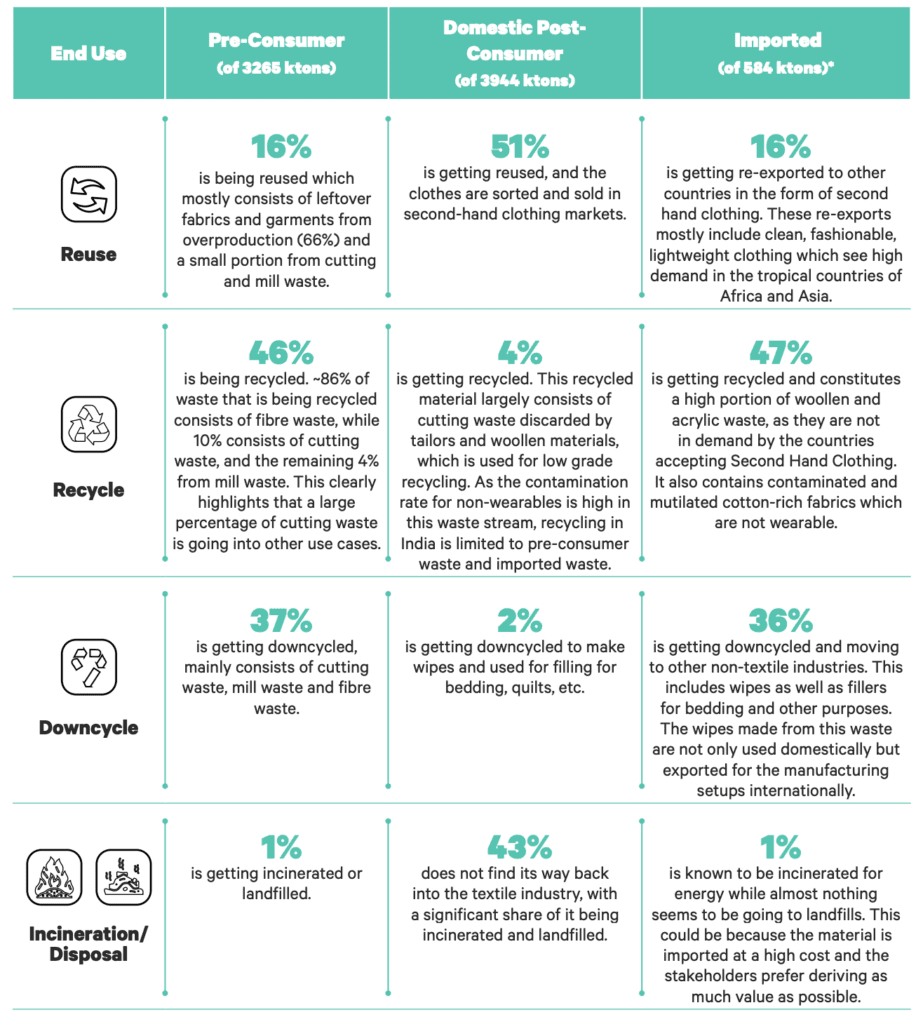 * A sizable share of the total imported waste, while not permitted, is known to be leaked into the domestic market for repair and resale in local markets. This quantity was difficult to estimate as there are multiple points of leakages across the value chain. Additionally, due to the highly informal nature of this value chain, the study could not access stakeholders dealing with this waste and estimate its quantity.

61% of textile waste mainly consists of cotton and cotton blends in India, however, there is a growing trend of polyester and other synthetic blends, which currently forms approximately 19% of total waste generated. 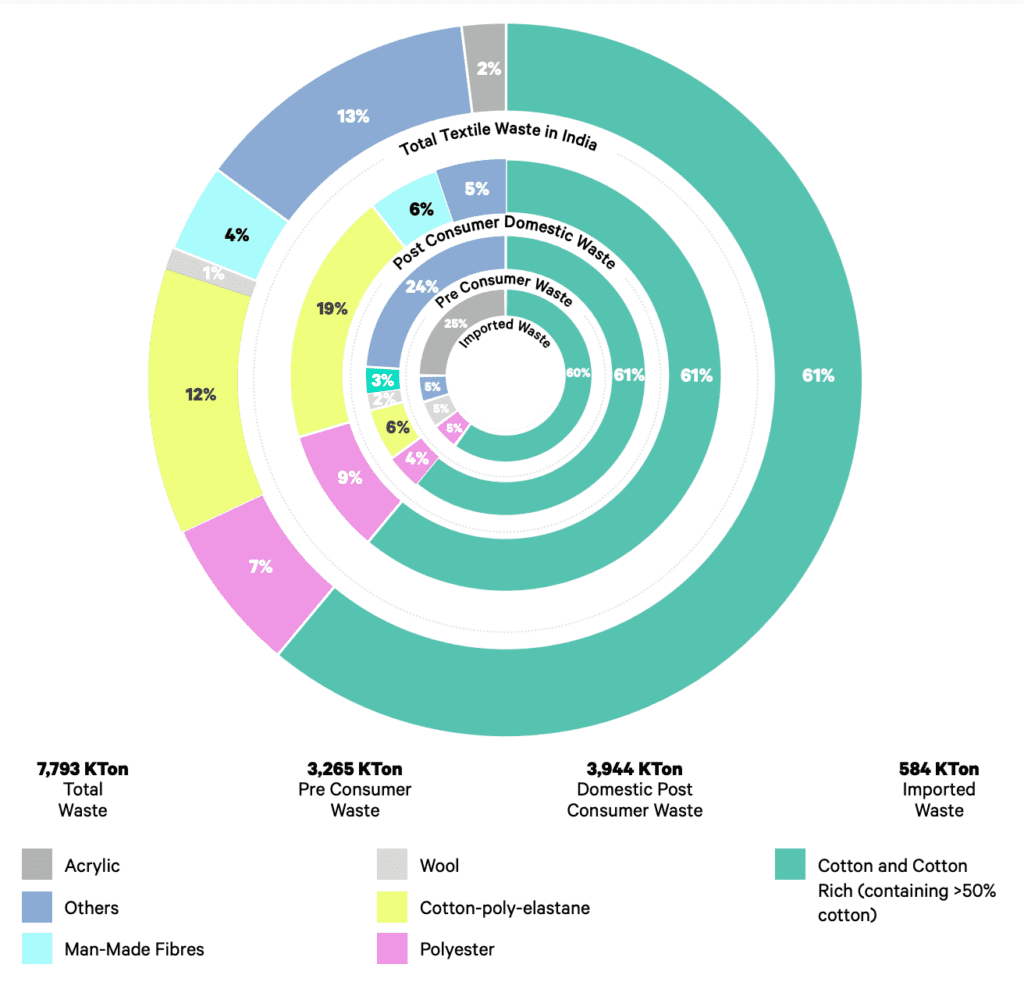 The Indian textile industry uses a wide variety of fibres, ranging from natural fibres such as cotton, jute, silk, and wool, to synthetic fibres such as polyester, elastane and man-made cellulosic fibres (viscose, for example) among others. 44 While a majority of fabrics and garments in India are cotton and cotton rich blends (blends with at least 50% cotton composition), 24% of total apparel produced is comprised of other blended fibres. While these fibres individually do not form a large share, they collectively form 1018 ktons (13%) of total textile waste Illustration 13: Material composition of textile waste in India Composition of textile waste Acrylic 7,793 KTon Total Waste 3,944 KTon Domestic Post Consumer Waste 3,265 KTon Pre Consumer Waste 584 KTon Imported Waste Others Cotton-poly-elastane Man-Made Fibres Polyester Wool Cotton and Cotton Rich (containing >50% cotton) generated, denoting the need to institute waste management processes for waste beyond cotton and cotton rich blends.

Over the last five years, there has been a considerable increase in the quantity of synthetic textile waste, specifically polyester.45 Currently synthetic fibres account for 19% of the total textile waste, but this is anticipated to increase given market demand.

Polyester’s high stain resistance and low economic cost has made it a desirable raw material for the fast fashion industry.46 Global estimates suggest that polyester formed 52% of total fibre manufacturing in 2020 and between 2000 to 2015, polyester production increased by 157%.47 48

While synthetic materials already represent a higher proportion of domestic post-consumer waste (28%), compared to other waste streams, its share in imported waste streams has risen over the last five years, with importers in the KASEZ increasing as high as 10% in some cases.50 In the pre-consumer waste stream, approximately 10% of the production and subsequently textile waste consists of synthetic materials. This highlights the need for dedicated efforts towards devising and investing in recycling technologies that will enable suitable recycling of these materials.

Most of the textile waste that is generated domestically and imported to India converges at Panipat and Tirupur, which are major recycling hubs in the north and the south of the country, respectively. Additionally, medium and small scale recycling facilities are prominent in Amroha and parts of Rajasthan, Madhya Pradesh, Punjab and Gujarat which have medium to small-scale recycling facilities.

According to the 2018-19 industry survey, Gujarat, Karnataka and Tamil Nadu are the largest textile and apparel hubs in India, collectively producing more than 56% of the textile production and 51% of annual apparel production in the country.51 Beyond these three states, medium to small-scale manufacturing clusters are present in multiple states as shown in illustration 16, leading to high waste generation across India. 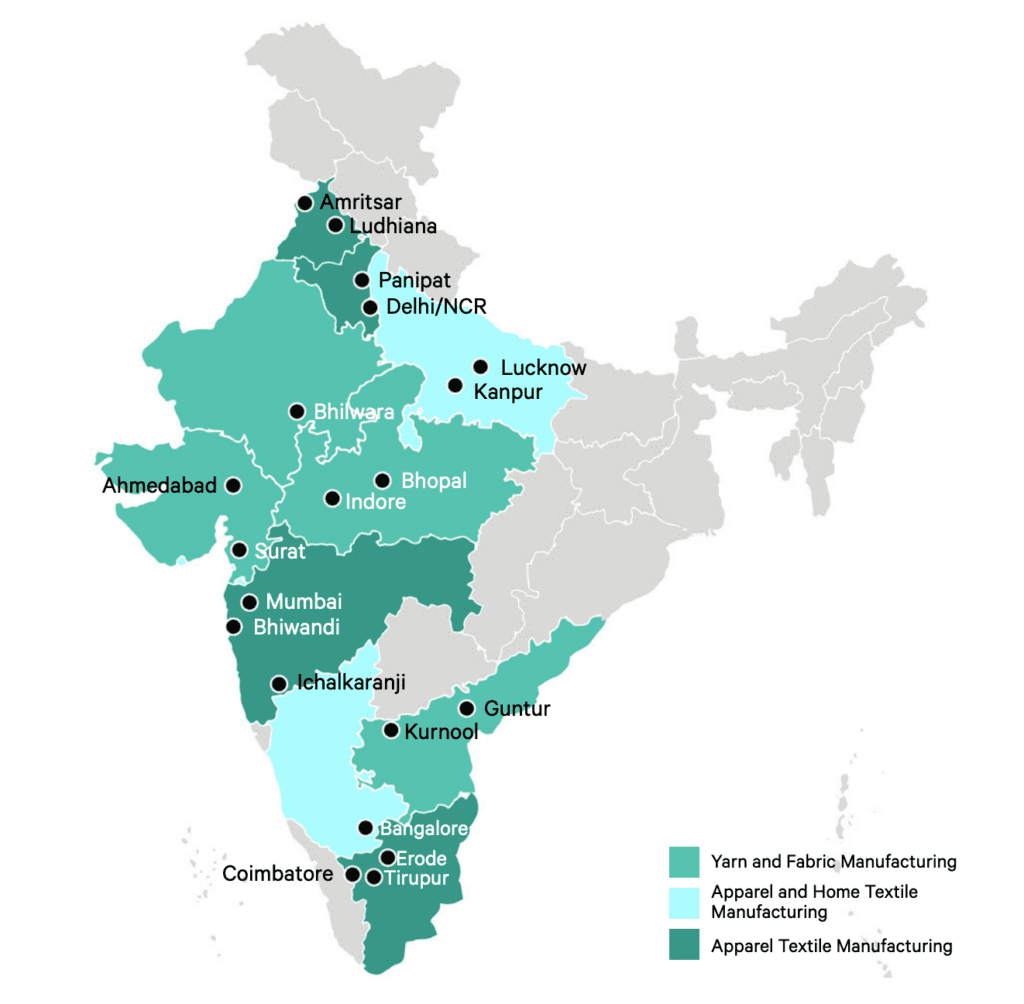 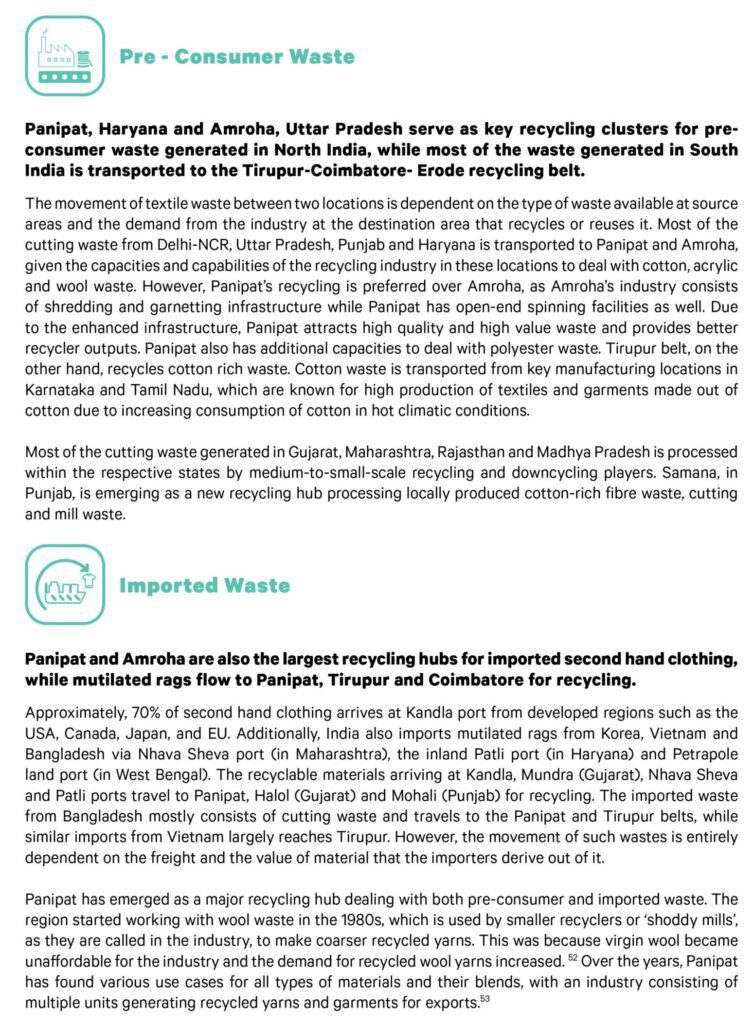 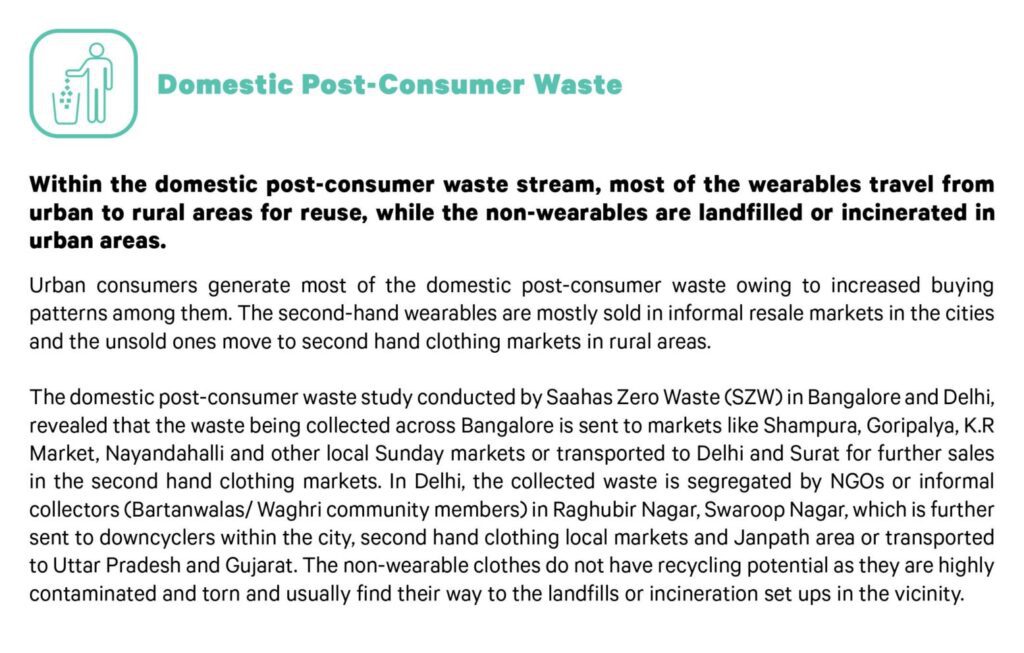 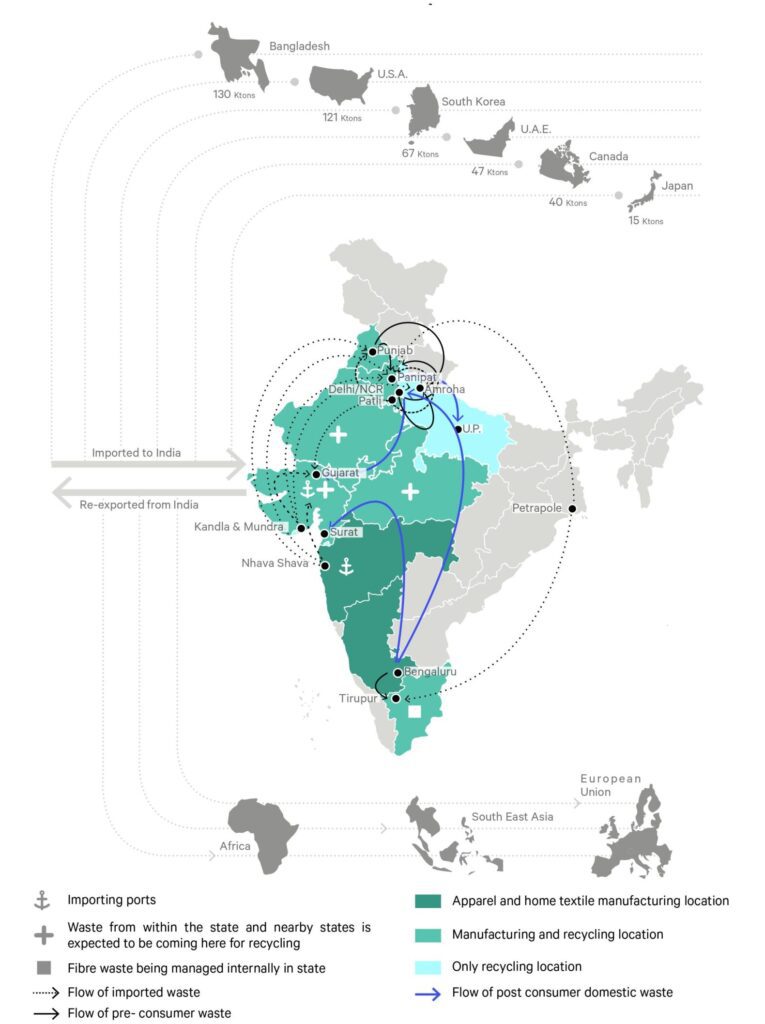 Illustration 15: Textile waste flows within and outside India

Extensiveness of textile waste in India